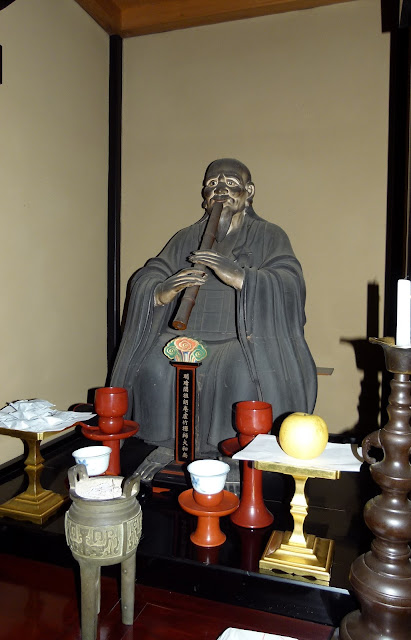 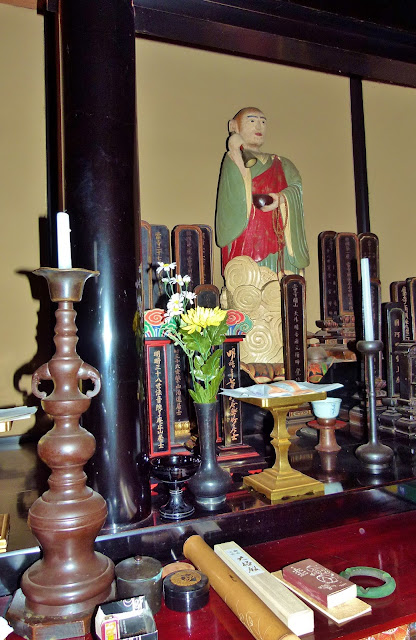 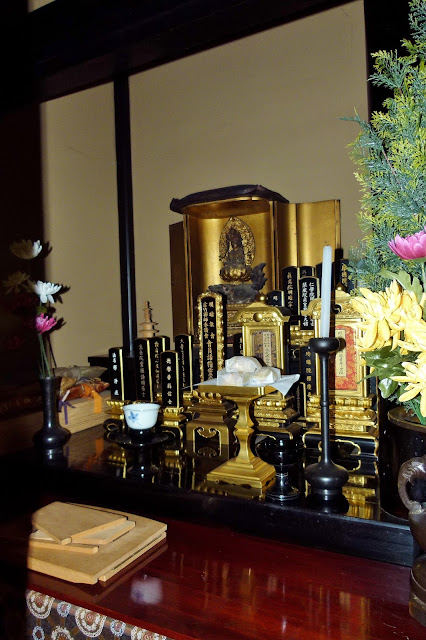 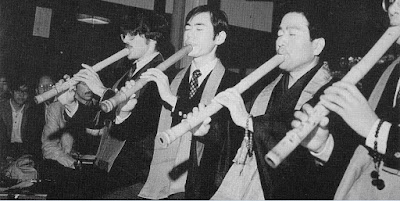 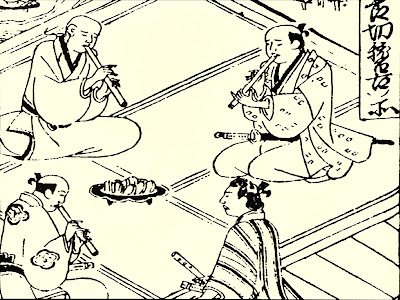 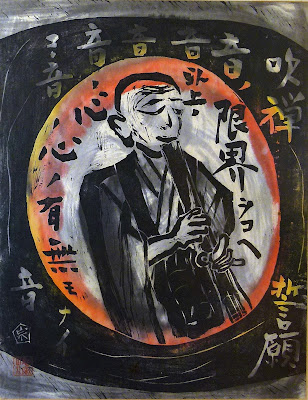 The Insight of the Scroll

A Komuso Priest pointed and said the insight of shakuhachi practice is contained in this scroll. 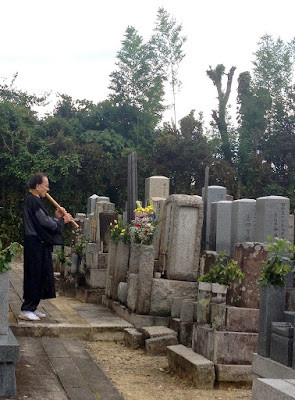 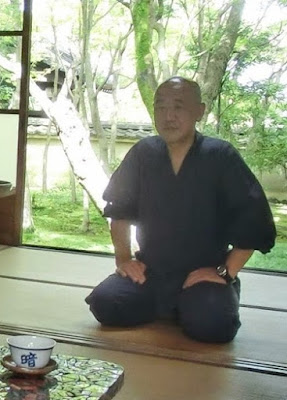 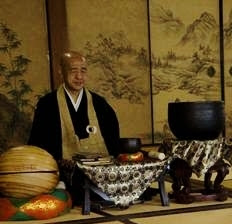 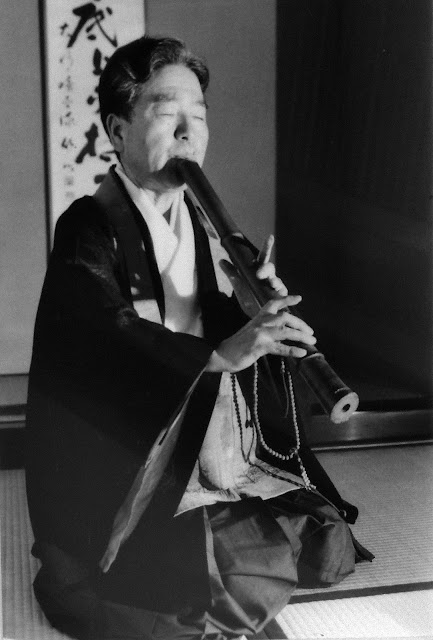 Dr. Kojima (Toyoaki), ISSUI/HOAN (小島豊明,一吹/保 安) is the current abbot (Kansu貫主, pronounced “kanshu” in the Kyoto dialect), of the Meian (aka Myōan, the older, more traditional pronunciation of the kanji) Kyōkai association (明暗協会) , and one of its most distinguished sensei (先生) teachers. The Meian Kyōkai is one of the few shakuhachi organisations in Japan that is dedicated solely to performances of the sacred solo music of the shakuhachi called honkyoku (本曲). Other shakuhachi schools (ryū 流) and associations (ha派) also revere the sacred solo literature but in addition they have highly developed secular, “outside” music repertoire, gaikyoku (外曲), which usually receives a greater amount of attention, thanks to its much larger repertoire and highly social contexts.

The Meian Kyōkai is rooted in the historicity of the komusō (虚無僧) who were nominal members of a Zen Buddhist sect called the Fuke-shū (普化宗). (The other, far more prominent sects are the Rinzai and Sōtō, names that are more familiar to Westerners and even the Japanese.) When the komusō were not playing their flutes on their takuhatsu (托鉢) alms-gathering rounds, it is assumed that they would play the sacred melodies as part of their devotional exercises within their home temples.

Many members of the Meian Kyōkai are also associated with other shakuhachi organisations such as the Tozan ryū (都山流) but by far, the largest constituency is comprised of the Taizan ryū (男山流), founded by one of the founding fathers of the Meian Kyōkai, Higuchi Taizan (樋口 対山, 1856 - 1914),who received the designation of 35th abbot and the official title of KŌDŌ.

Although the Fuke-shū and its community of monks no longer exists in Japan, following the ban of 1871 (Meiji 4), their sacred music and spirit lives on within Kojima Sensei and the other members of the Meian Kyōkai which was founded in Meiji 16 (1883), following the lifting of the ban against the activities of the komusō in 1881. They are essentially lay members of a Buddhist organisation and their activities are centralized within their own temple named Meian-ji (aka Myōan-ji 明 暗寺), located within the precincts of the temple complex known as Tōfuku-ji (東福寺) in Southeast Kyoto. Their musical ethos is completely dominated by the sacred intention of most shakuhachi players, especially in the west – to discover “self” awareness through the application of Zen Buddhist principles of meditation and contemplation to the performance of their flutes. Stated succinctly by Dr. Kojima, “the playing is not like zendō (禅道), it is zendō”.

Born in 1928 in Himeji City, Hyogo Prefecture, Dr. Kojima began his shakuhachi training in 1951 with Tanikita Muchiku (谷北 無竹, 1878-1957) ROAN, 37th abbot of the Meian Kyōkai and a prominent student of Higuchi Taizan, mentioned earlier. Dr. Kojima eventually received his certification (Meian Dōshu 明暗道主) and the honorary natori (名取) of ISSUI, in 1969 under the tutelage of the 38th Koizumi Shizan (小泉止山) RYOAN (ca. 1953-72). Since then, he has taught continuously, including many Westerners such as myself. He was an active participant in the activities of the Meian Kyōkai and was heard every year at their biannual recitals (Shakuhachi Honkyoku Senkoku Kenso Taikai 尺八 本曲全国献奏大会). His musical skills were also integral to several television productions such as The Komusō Temple (Komusō no Tera, 1973), The Spirit of the Shakuhachi (Fuke Meian Shakuhachi no kokoro, 1978) and Zen and Shakuhachi (Zen to Shakuhachi, 1982). His dedication to the shakuhachi and its ideals is also evident in his magazine article “Zen and Shakuhachi”, published by Hanazono (1979, volume 29, pp. 12-18).

In 1991 (Heisei 3) Dr. Kojima was elected to the position of the 41st abbot of the Meian tradition. The lineage extends deep into history, past the rejuvenation of the Meian repertoire and the formation of the Meian Kyōkai, to the traditional beginning of the komusō tradition by Kakushin (心地覺心, 1207–1298), now designated as the first Kansu, and his student Kyochiku Zenshi (虛竹禅師), Kansu 2, represented by a statue in the Meian-ji temple.

During the 2012 World Shakuhachi Festival in Kyoto, Dr. Kojima opened the program of the Meian Kyōkai concert by playing Koku (虚空), perhaps the most revered composition of the sacred literature. It was a very great honour and a fitting tribute to his august position as the 41st Kansu.

As is true of all lay members of the Kyōkai, Dr. Kojima had a “day job” that sustained his interest and dedication. He was a doctor of medicine with a long and distinguished career at the Japan Baptist Hospital in Kyoto, specializing in geriatric medicine. Not content with simply maintaining his medical practice, he actively pursued research programs which resulted in several discoveries, one of which culminated in a presentation on gastric cancer delivered to the 6th International Cancer Congress in Florence, Italy in 1947. He was married with four daughters and several grandchildren.

Kojima sensei was a modest, unassuming man who brought a deep intensity of concentration to his performances of honkyoku. His style of instruction was traditional although he did not object to the ingenuous questions of foreigners and the use of western inquiry and dialogue, within certain contexts. He viewed even the process of Meian instruction as a Zen discipline but, lest the student become daunted by such single-minded dedication, the twinkle in his eyes became instantly re-assuring. We can all be grateful for the continuing efforts of men and women such as Dr. Kojima who nurture a living tradition that goes beyond Japanese spiritual values to take root in the very core of universal mankind. 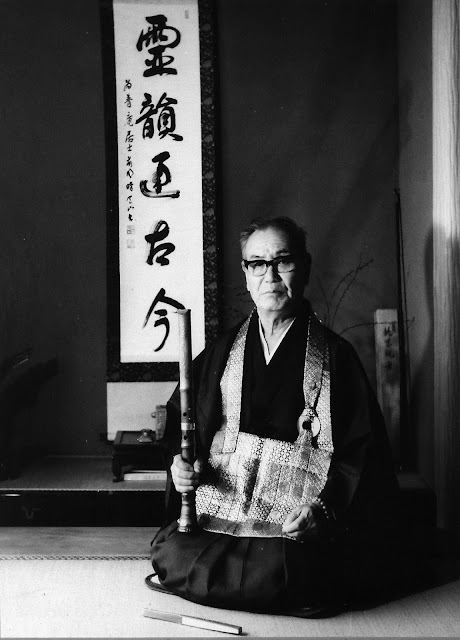 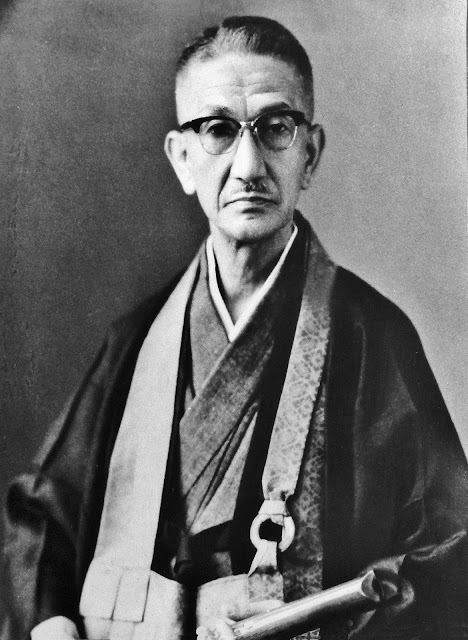 Was said to have "enhanced" the honkyoku that Higuchi Taizan had collected possibly by organizing them into the teaching regimen of 32 honkyoku, with it's levels of achievements and ability, similar to the same system found in the Kinko-ryu.  He also notated and published them in the form that exists today. 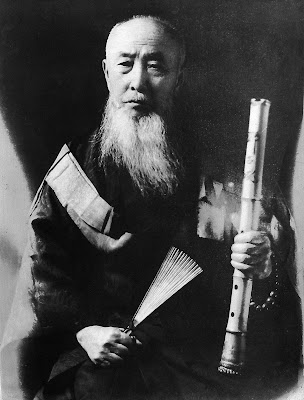 37th Abbot of Meian-ji from 1949. Ten years after Kobayashi Shizan’s death, the Myoan-kyokai, in association with the soke (the head person of a Ryu) of different shakuhachi ryu, elected Tanikita Muchiku as his successor. Born in Kyoto in the eleventh year of Meiji (1878), he was first initiated into the Myoan Taizan style of shakuhachi by Takaya Yuchiku, a student of Higuchi Taizan; later, in the forty-first year of Meiji(1908) , Tanikita began to study with Higuchi Taizan. It is well known that the bereaved family of Higuchi Taizan claimed Tanikita Muchiku to be the true bearer of Taizan’s style.

The Society for the Study of Classical Shakuhachi; "Koten-shakuhachi-kenkyū-kai"

Tanikita Muchiku encouraged Sakurai Muteki to establish a Meian-Shakuhachi group in Osaka. Hence, the "Koten-shakuhachi-kenkyū-kai" (Society for the Study of Classical Shakuhachi) was born.Monden Tekiku was the second head of the group and retired about 8 years ago (after his 80th birthday). The present leader and Monden Tekiku's successor is Maeda Tekifū. The aim of the group is the study and transmission of Meian-Shakuhachi music using wide bore 2.5 jinashi-shakuhachi, usually self-made. Some of these beautiful and great playing instruments are pictured in the photograph. A dark brown Edo period 1.9 is placed 2nd from top for sense of scale. Aumann-san and Oota-san are by the table of some of their superb craftsmanship. 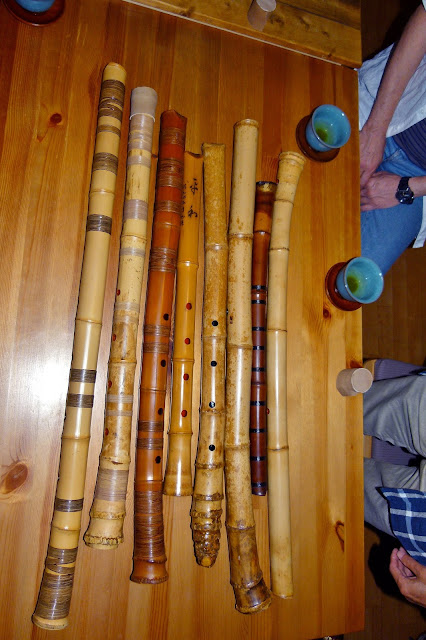 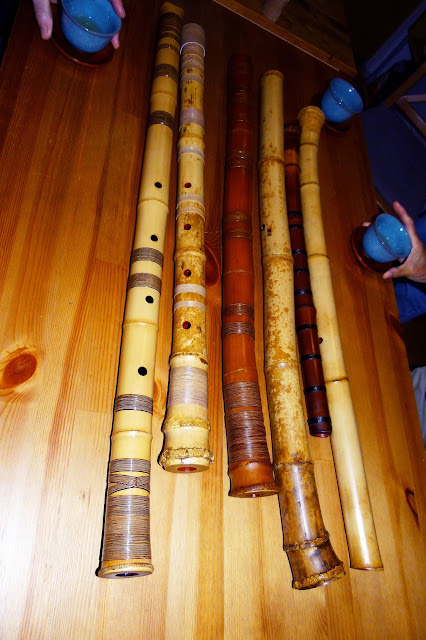 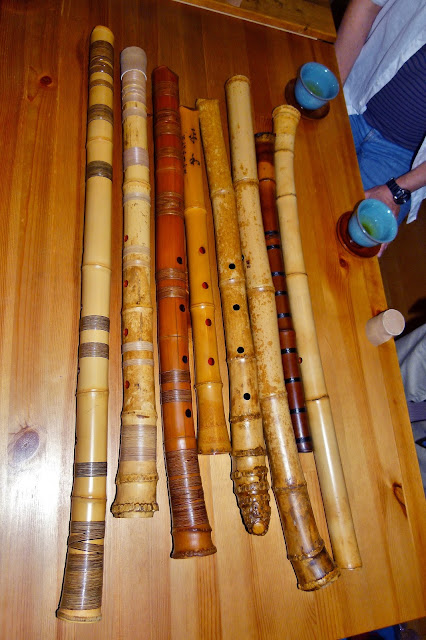 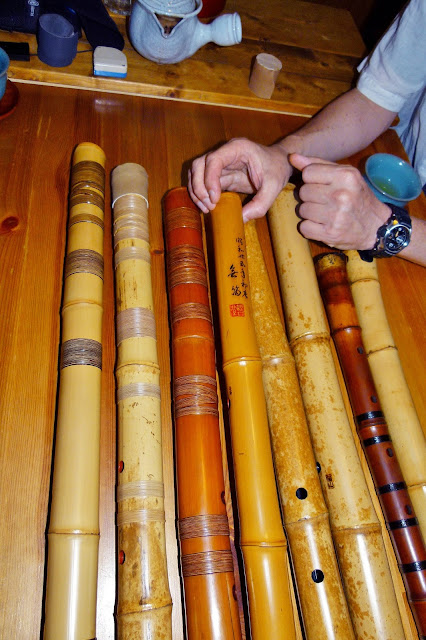 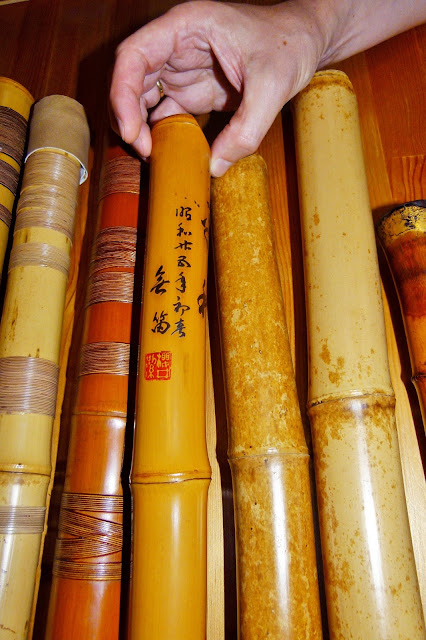 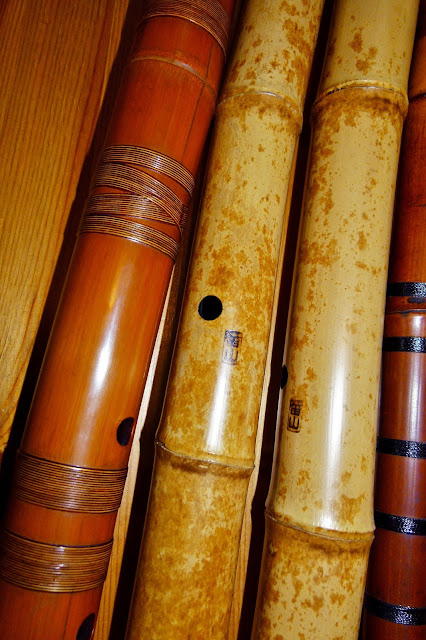 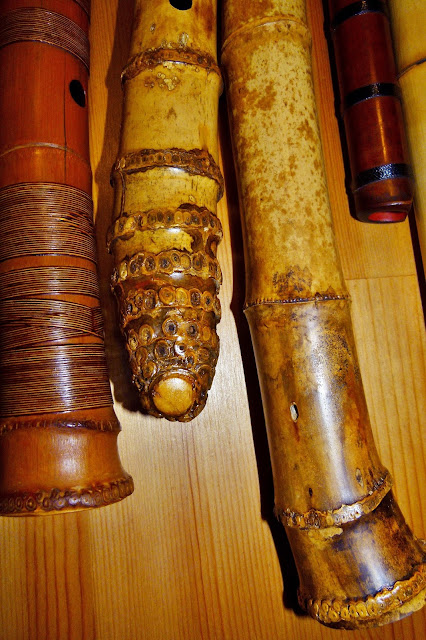 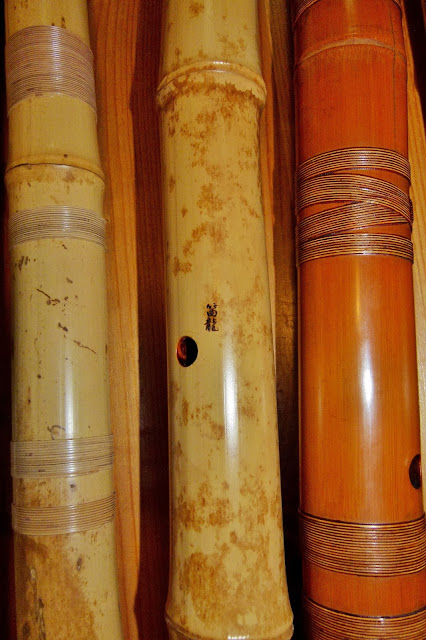 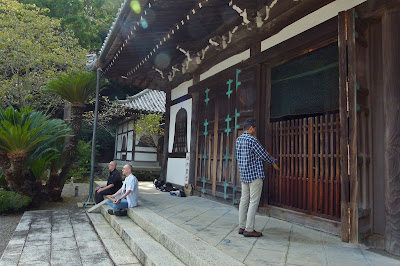 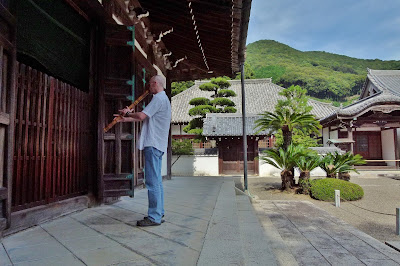 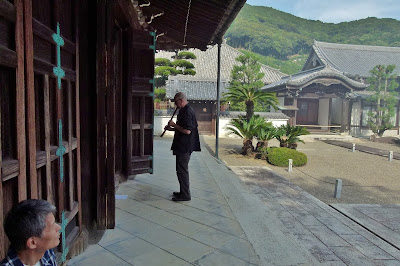 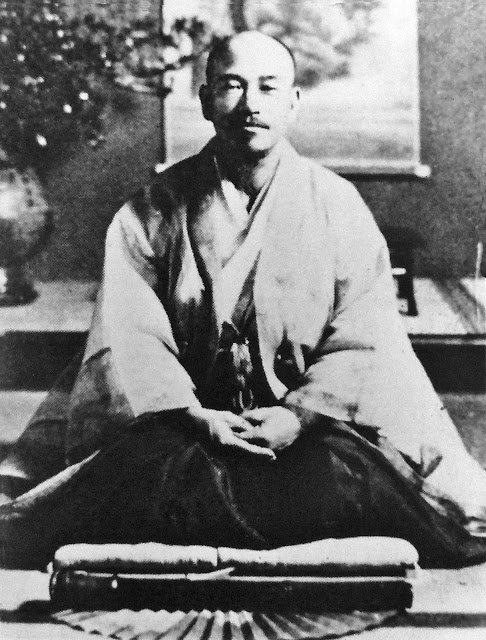 The second most important figure in this post-Edo Meian-ha history, after Taizan, is Kobayashi Jido Shizan. He "enhanced" the honkyoku that Taizan had collected, possibly by organizing them into the teaching regimen of 32 honkyoku, with its levels of achievement and ability, similar to the same system found in the Kinko-ryu. He also notated and published them in the form that is still in use today. Shizan was the 36th abbot of Meianji from 1914.

A Visit to the Temple

Many thanks to JR Schmick for graciously leading us on a visit to our center of Myoan shakuhachi, the Temple of Light and Dark, Myoanji, and in a group prayer of Choshi before the altar.