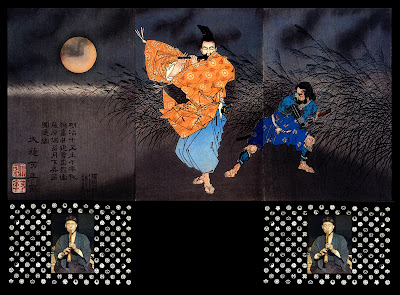 Woodblock print by Tsukioka Yoshitoshi (1832-1892), published 1883. Depicts Priest Fujiwara no Yasumasa encountering the bandit Kidomaru on Ichihara Moor. Kidomaru intended to kill Yasumasa, but was so overcome by the beautiful sound of the flute music that he gave up his plan. 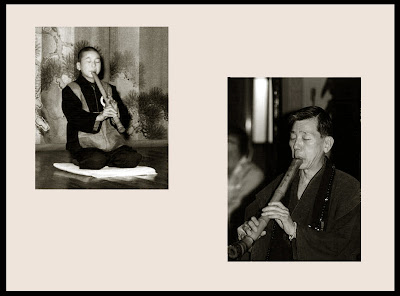 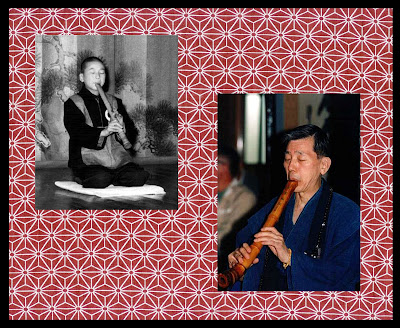 Myoan Fan for a Hot Summer 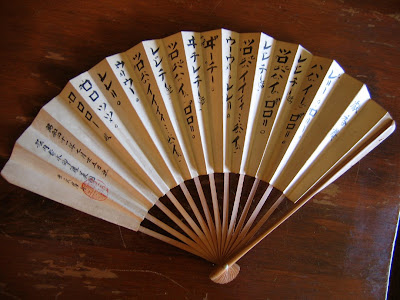 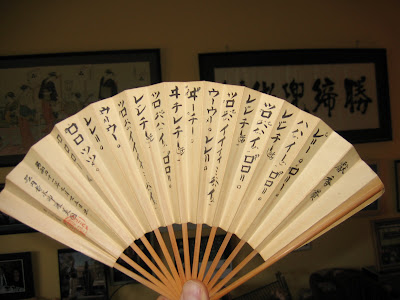 Fan painted by Tomimori Kyozan with honkyoku calligraphy, for keeping cool during suizen. 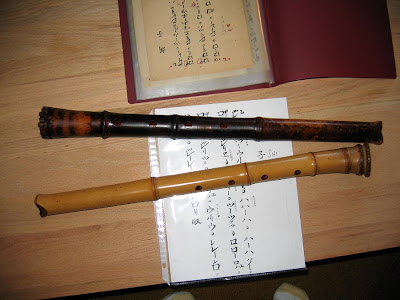 Mori-san's first flute (at top), a Kinko shakuhachi that was passed down in the mid 1950's from his Uncle, who also played shakuhachi. Mori-san first started playing with this flute in the shakuhachi club in high school.

The Saddest Shakuhachi in the World: Hiroshima Sweetheart

Note the changes in the color of the bamboo as it ages. 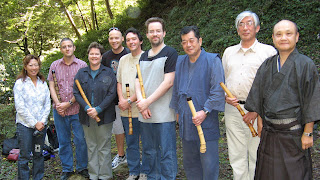 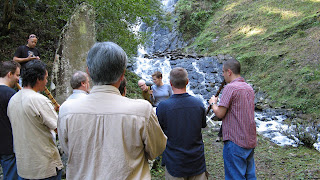 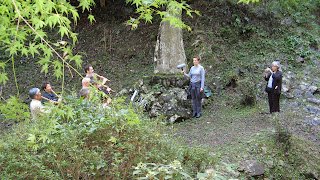 Last week I gave my Japanese Sensei Morimasa Horiuchi some recordings of Yoshio Kurahashi playing several Taizan-ha honkyoku in the field, within temples or outdoors. Especially beautiful to hear was the waterfall, Taki Ochi, played at the inspiring fall itself with the sound of water and nature. He said what a coincidence, he was there when Yoshio played it in 2007! As I played Taki Ochi on my old Myoan jinashi flute, he pulled up these images from his computer. One small world. 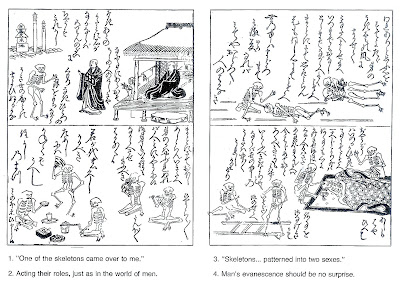 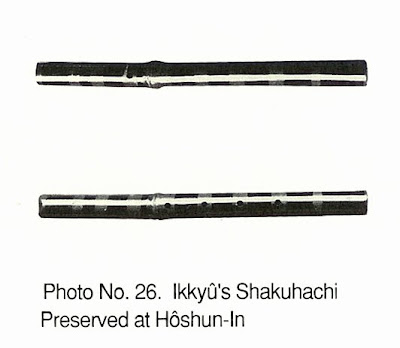 Ikkyu's Shakuhachi (Hitoyogiri 1.1)
box reads "Ikkyu oshou=priest, Shakuhachi Shuunan: the name of the temple that shakuhachi (to be correct Hitiyogiri=short shakuhachi not 1.8 but 1.1 and slim) belongs to this temple.

Music from the shakuhachi, sorrow difficult to bear,
Blowing into the barbarian flute, a song at the frontier;
At the crossroads, whose piece does he play?
Among the students of Zen, I have few friends.

Shakuhachi: A bamboo flute with a very shrill sound. Wandering mendicant monks called komuso played the shakuhachi as they went about begging.

This is a description of Ikkyu's loneliness. He hears an unfamiliar song played on a shakuhachi at the crossroads and imagines that he is at some frontier post in China hearing the strange music of the barbarians. The poem as a whole is reminiscient of lonely duties at frontier outposts.
Ikkyu himself was known to have played shakuhachi in the streets.

From Ikkyu Sojun: A Zen Monk and his Poetry by Sonja Arntzen 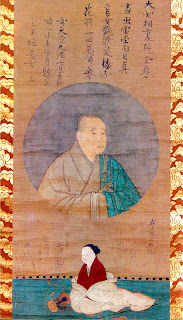 With motion it rings, when still it is silent.
Does the bell hold the sound or does the wind?
An old monk jangled out of his midday nap.
How is this? The midnight bell at high noon?

The realm of sights and sounds is endless,
Yet, imperceptively, a pure note crystallizes.
That old fellow P'u-k'o knew a trick or two.
Wind and bell hang together, there above the jewelled railing.

In Ching-te Ch'uan-teng lu (Transmission of the Lamp) there is a passage in which two monks argue about a banner waving in the wind. How can one really tell, they wonder, whether the wind moves the flag or the flag moves the wind? Finally, they are told it is neither the wind nor the banner that moves, but only their fluttering minds. In the first poem, Ikkyu restates the issue in auditory terms. The last two lines introduce a second theme--the fact that, according to Zen, mere sights and sounds can, under proper conditions, bring enlightenment. This was, of course, the case with Ikkyu's own satori which was triggered by a crow-call in the middle of a summer's night.

The second poem carries the image of the ringing bell still further with a reference to the T'ang eccentric, Chen-chou P'u-k'o (Jpn: Chinshu Fuke). P'u-k'o was a wild fellow who liked to sham spells of madness. Often he refused to speak a word to those around him. At other times he waved a small bell in the air shouting "If something bright and clear appears, I'll hit its brightness. If something dark and mysterious appears, I'll hit its darkness." Or again P'u-k'o would slip behind a student and ring the bell violently in his ear. Or he might hide it behind his back, and if anyone peered over his shoulder to see the bell, P'u-k'o would declare, "That will be a copper please; I'll use it for food when there isn't anything."

The best-known legend about P'u-k'o (recorded in Chapter 47 of the Lin-chi lu) relates that when he felt the approach of death, he came into the Chinese capital and obtained a casket which, after several false starts, he dragged out through the North Gate. There he climbed into the casket and had it nailed over him. When the crowd that had gathered around finally grew restive and oped the casket up, they found it quite empty--though the faint sound of the bell, as if from a far distance, could be heard fading into the sky.

P'u-k'o was also the mythical founder of the komuso monks of the Tokugawa period who wandered about Japan "playing the wordless message of Zen" on their long shakuhachi flutes. Ikkyu, too, is sometimes placed in the lineage of these mendicants of the so-called Fuke (P'u-k'o) sect of Zen--perhaps because of his own wandering lifestyle and his often-expressed love of the shakuhachi. At any rate, P'u-k'o was one of Ikkyu's favorite figures, and it is clear that it is P'u-k'o's bell that rings through both poems.

Who could walk beside Te-shan and Lin-chi?
That old madman from Chen reallty startled the crowds.
Some die in meditation, some on their feet,
but he beats them all.
Like a distant bird call, his bell rang faintly.

Arguing first the Bright Head, then the Dark,
That Zen-fellow's tricks fooled them all.
Now, blowing up again, the same old madman,
A sensual youth, howling at the door. ***pp. 146-148

Ikkyu loved both the Japnese shakuhachi and the plants from which these bamboo flutes were produced. A number of his poems touch on these images.

Bright new moon is the clear Autumn sky.
Over the distant rattle of dancing villagers' drums,
The clear line of the flute turns everything to tears,
Yet startles me from a long, sorrowful dream.

PORTRAIT OF TON-AMI WITH A SHAKUHACHI

Shakuhachi music stirs up both gods and demons.
Once agian the world's number-one rake lacks a friend.
In the teeming universe just that music.
He leaves the painting to enter a bamboo flute.

The shakuhachi is a symbol for lonliness here. Ikkyu has apparently been looking at a portrait of the famous poet, Ton'a (Nikaido Sadamune, 1310-1384) and found in him, if not a physical, at least a spiritual companion.

Even now I remeber the recluse of Uji.
Empty bell, no wine, colder than ice.
Yet, the song of the angel's shining cloak.
Lost among refugess, the rural priest takes comfort.

On the surface of this poem, it appears that Ikkyu spent some uncomfortable days at a hermitage in Uji. The story of the angel who came to earth one day and foolishly laid her feathered robe down where a fisherman was able to snatch it up was made into one of the most famous plays of No repetoire, Hagoromo (The Feathered Cloak), written by Zeami (1363-1444). The "rural priest" of the last line can be taken to be either the unidentified hermit of Uji or Ikkyu. Although, if we accept the highly mythologized traditions of the Fuke-shu sect of Zen, we would have to identify the hermit as Roan (also known as Ichiro) who was supposedly a central figure in the founding (or, according to its own legends, the refounding) of the flute-playing komuso tradition is the 1400s.
These traditions attribute several shakuhachi poems not found in the Kyoun-shu to Ikkyu, as well as include some poems that we know are his. However, it is not clear whether Ikkyu had actual contact with early figures in the Fuke-shu or was simply adopted into the legends at a later date. His love of the flute and also the Fuke sect's namesake, Chen-Chou P'u-k'o, would have provided sufficient cause to make such an allegation. ***pp. 180-181


DIALOGUE WITH A YAMABUSHI

One time, when Ikkyu was in a solitary mood, he went to the Kanto with only his flute for company. A yamabushi happened to meet this priest strolling up the path playing his flute like a wandering komuso. Feigning stupidity, the yamabushi approached and asked him,


"I say there, wandering priest, where are you going"
"I go wherever the wind takes me."
"I see. But what do you do when the wind stops blowing?"
"Why I just do the blowing myself," said Ikkyu turning back to his flute.

Outdone, the yamabushi clapped his mouth shut and passed by without a backward glance.

Notes
1. Ikkyu's love of the Japanese flute is well documented.
2. The Komuso were an eccentric fraternity of itinerant monks of the Tokugawa period. These members of the so-called Fuke sect of Zen were noted for their odd hats which resembled a beehive and covered the monk's entire face. They wandered all over Japan "playing enlightenment" on long shakuhachi flutes. Often they carried swords as well, and it was generally suspected that no small number of their ranks were nothing more than mercenaries in clerical disguise. Because of the bad reputation that it developed, the sect was often made subject to government regulation, and it was entirely supressed in 1871.
The supposed founder of the Fuke sect was the Chinese monk P'u-k'o (Jpn: Fuke). Since Ikkyu dedicated poems to bamboo, to P'u-k'o, and to the shakuhachi, the later Fuke sect claimed him as one of their founding figures, though the supporting evidence for this thesis is very weak. No full study of the Fuke fraternity exists in English, but my"Shakuhachi Zen: The Fukeshu and Komuso," Monumenta Nipponica, vol. 32, no. 4 (Winter 1977), pp. 411- 440, will provide the curious reader with a useful introduction to the group. ***pp.295-296 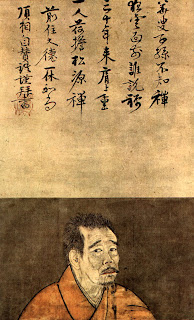 The Dreamy Sound of Bokushitsu's
Shakuhachi Awakened Me
From Deep Sleep One Moonlit Night
_
A wonderful autumn night, fresh and bright;
Over the echo of music and drums from a
distant village
The single clear tone of a shakuhachi brings a
flood of tears--
Startling me from a deep melancholy dream. ***p. 69
___
From Wild Ways Zen Poems by John Stevens
___
I love bamboo how it looks
and because men carve it into flutes ***p.46
__
flute notes bring gods demons only that music
again the world's biggest ass-man hasn't one friend
his loneliness that music ***p. 68
___
Crazy Cloud likes his own mind its wish for flutesongs rainy
nights
drinking muttering beside his women ***p. 72
___
From Crow with No Mouth: Ikkyu by Stephen Berg