A Brief History of the Fuke Sect and Myoan Taizan-ha 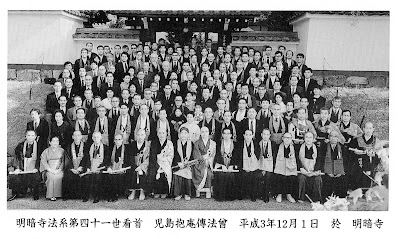 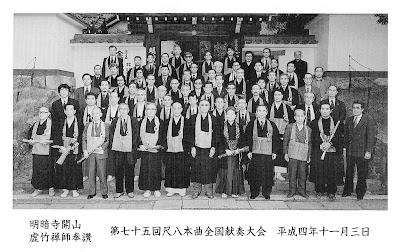 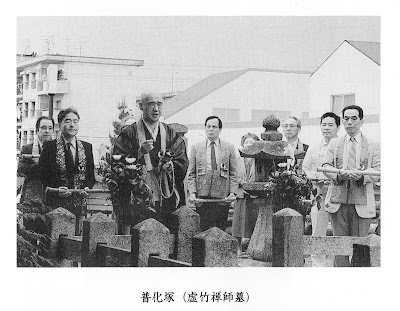 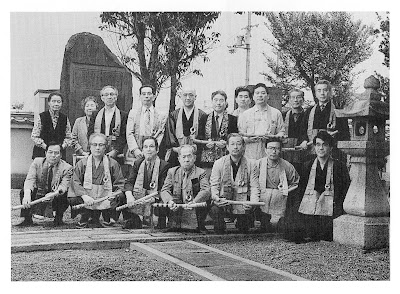 Chohaku uses a bamboo pipe to imitate the sound of Fuke’s bell, and creates the piece Kyotaku (“Empty Bell”).

16 generations later, the Japanese monk Kakushin (Hotto Kokushi) travels to China, learns Kyotaku, and returns to Japan in 1254.  He builds Saihoji (later known as Kokokuji) at Yura and introduces the shakuhachi piece Kyotaku to Japan.

Kichiku (Kyochiku Zenji) becomes a pupil of Kakushin.  He dreams the sounds of what he transcribes as the two shakuhachi pieces Mukaiji (Flute in a Misty Sea) and Kokuji (Flute of Emptiness).

After Kakushin’s death, his pupil Myofu builds the Kyoreizan Myoanji temple at Shirakawa in Kyoto.  Kyochiku Zenji becomes the temple’s first abbott.  By the late 18th century, there are more than 70 komuso temples throughout Japan.

In 1705, Myoanji takes control over all the komuso temples west of the Kansai region, along with the main temple Kokokuji.  Myoanji establishes a strong relationship to stand up to temple ranking system of the Bakafu and to Ichigetsuji in the Kanto region.

When the Tokugawa central government (Bakufu) in the mid 1800s showed signs of weakness under pressure from the outside world to open trade, komuso began to lose their self-discipline: there was an increase in bogus komuso resorting to violence, extortion and vandalism.  The Bakufu at this time pass laws revoking their privileges and prohibiting begging.

Myoan monk Ozaki Shinryu (1820-88) and his pupil Kondo Soetsu (1821-67)  side with the imperial faction to “expel the barbarians”.  As a result, the 33rd kansu (head of Myoanji) Kanmyo Gendo is thrown in jail.  Shinryo is also arrested and confined.   The new government abolishes the Fuke sect in October 1871. The 34th kansu of Myoanji, Jishosakuhi,  is forced to return to secular life.  Sacred items and documents of Myoanji are moved to the Zennein temple inside the precincts of  the Rinzai temple of Tofukuji in Kyoto.

Religious mendicancy is authorized once again in 1881, resulting in a resurgence of komuso.  Tofukuji burns down this year, and the need to rebuild the temple was one of the reasons the komuso are allowed to resume their activities in 1883, which later results in the formation of the Myoan Society in 1890.  Katsuura Shozan (1856-1942) becomes head of the Kyoto branch.  Shozan brings 63 honkyoku which constitute the repertory of the Myoan Shinpo school, 45 of which he has learned directly from Ozaki Shinryu.

Higuchi Taizan (1856-1914) first studies shakuhachi with Kanemoto Seian, a clansman from the Owari fief who had studied with Gyokudo Baizan at the Fudaiji temple in Hammamatsu.  He brings the 11 Seien honkyoku he had learned to Kyoto in 1885.   Taizan is nominated as shakuhachi instructor for the Myoan Society in 1890.  Taizan masters honkyoku of various lineages including the Kinko, Kyushu, and Oshu traditions.  Of the 11 pieces associated with the Fudaiji temple, he scarcely modifies the three pieces Choshi, Renbo-nagashi, and Akita Sugagaki.  He slightly edits the pieces of Shizu, Takiochi, Koro-sugagaki, Mukaiji, and the first half of Koku.  The pieces that he extensively re-notates are Tsuru no sugomori, the second half of Koku, and Kyorei. Taizan begins studying with Araki Kodo I in 1894, and learns and adapts several pieces from Takigawa Chuka including Kadobiraki, San’ya-nagashi (renamed Yoshino no kyoku) and San’ya sugagaki (renamed Shin’ya no kyoku). In 1895 he learns from Iso Itcho at the Itchoken komuso temple in Hakata in Kyushu the pieces Kumoi no kyoku, Azuma no kyoku and Sashi.

Taizan had generally finished his work on consolidating the repertory around 1902, with finalized forms nearing completion around 1913.  Taizan modifies existing honkyoku by either change of title,  division of the pieces, addition of introductory sections, the addition or removal of certain musical figures, and the extensive omission of melodic figures.  Taizan fully engaged in the task of rearranging the music on the basis of a clear awareness of overall musical structure.  After Taizan’s death, his pupil Kobayashi Shizan (1877-1938) becomes the 36th kansu, while Taizan was recognized as the 35th kansu and the first to re-assume the role after it lapsed with Jishosakuhi in 1871.  Shizan further consolidates the repertory handed on to him by his teacher and lays down the method of performance, thereby establishing the Taizan school as a vehicle for transmission of the honkyoku handed down at the Myoanji.

In March 1950, Myoanji is granted permission to re-establish itself as the headquarters of the Fuke sect, with the Myoan Society as its parent body.  The principle of generation-to-generation instruction from master to pupil for the transmission of the Myoanji honkyoku is authorized in 1961, and a Myoan Instructors Society is formed, consisting of qualified instructors with their own teaching facilities.  A kansu is elected as necessary, to further the perspective of Taizan as a reflection of his guidance for a direct transmission in a spirit of sincerity, for the elevating insights of Suizen practice.