The Essence of Suizen 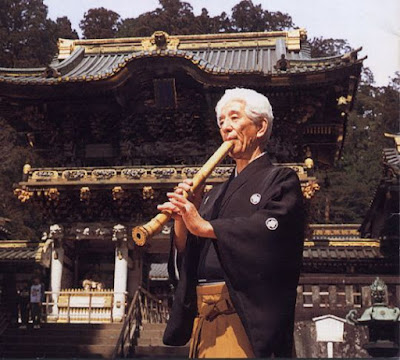 Paying homage at the Yomei'mon gate in front of Nikko, the burial site of the first Tokugawa Shogunate Ieyasu, the grand unifier of Japan.

The Player's Face and Scientific Assumptions


To measure the effect of the player's face, we took a plastic shakuhachi and cut away part of it so that we could insert the measurement head of our spectrometer inside the shakuhachi. We thus measure the acoustics of the player's face, from the point of 'view' of the instrument. Riley Lee, a famous Shakuhachi player who is currently touring the US was the experimental subject. We measured the acoustic impedance of the radiation field, baffled by his lips and face, as he demonstrated the configuration used to blow normal notes, singly and doubly flattened notes, raised notes and various different timbres.
Increased interest in non-European instruments has brought international attention to the shakuhachi or Japanese flute. This instrument is capable of great subtlety, having a wide range of sounds, and very flexible pitch. Although the instrument has only five finger holes, players can smoothly vary the pitch up and down to produce the notes of the Western scale - and all of the notes that fall in between. Players do this by changing the extent to which the upper lip and face cover the aperture across which they blow. This can be done by moving the lower jaw forward or back, and raising or lowering the instrument. To some extent this is possible in the Western transverse flute, but the effect is much greater on the shakuhachi because it is open at the blowing end, and so the acoustic baffling by the player's lips and face is more important. So in this research we measured the acoustic impedance of the instrument (alone, without a player) and the acoustic baffling of the player's face, as 'seen' by the instrument. Then we calculated the total response.
The instrument. Our laboratory specialises in the acoustics of the air-jet family of instruments, which includes flutes and recorders. Our measurement apparatus attaches to the instrument at the 'input', where the player would normally blow. We then inject an acoustic current (a specially synthesised flow of air) that simultaneously contains thousands of different frequencies. We use a microphone to measure the way the instrument responds to all the frequencies. Technically, we are measuring the acoustic impedance spectrum. The acoustic impedance is the ratio of sound pressure to varying air flow, and it varies strongly with frequency. Because shakuhachis and other flutes are open to the air at the mouthpiece, they operate at minima in the impedance: frequencies where small pressure differences can produce large flows in and out of the instrument. The frequencies of these minima determine what notes the instrument will play for a given fingering. The timbre of the sound produced depends (among other things) on the depths of these minima and how close they are to harmonic ratios. But we have first to correct these spectra for the instrument alone to include the acoustic baffling by the player's face.

The player's face. To measure this effect, we took a plastic shakuhachi and cut away part of it so that we could insert the measurement head of our spectrometer inside the shakuhachi. We thus measure the acoustics of the player's face, from the point of 'view' of the instrument. Riley Lee, a famous Shakuhachi player who is currently touring the US was the experimental subject. We measured the acoustic impedance of the radiation field, baffled by his lips and face, as he demonstrated the configuration used to blow normal notes, singly and doubly flattened notes, raised notes and various different timbres.

Using these data, we are able to display the acoustic response of the instrument plus player - esentially the acoustic situation that determines the behaviour of the jet of air which drives the instrument. The more that the player's lips and face obstruct the radiation from the input of the instrument, the lower the frequencies of the resonances. The results agree nicely with the amount by which players know they can flatten the pitch. We can also see effects which explain the different timbre of these notes.

And now a message from poet Walt Whitman:

WHEN I heard the learn’d astronomer;

When the proofs, the figures, were ranged in columns before me;

When I was shown the charts and the diagrams, to add, divide, and measure them;

When I, sitting, heard the astronomer, where he lectured with much applause in the lecture-room,

How soon, unaccountable, I became tired and sick;

Till rising and gliding out, I wander’d off by myself,

In the mystical moist night-air, and from time to time,

Look’d up in perfect silence at the stars.

Now back to science:  Some shakuhachi acoustics

We measure a quantity called the acoustic impedance spectrum, which may be considered as the response of the instrument to all frequencies. This quantity is measured on the instrument itself, without a player. For an explanation of this quantity, see What is acoustic impedance?. For a preliminary introduction to the acoustics of the flute family, see Introduction to flute acoustics.

The acoustic impedance spectrum of the shakuhachi, measured at the input, for the standard fingerings for the notes ro and tsu. The impedance is plotted in dB, i.e. 20 log (Z/Pa.s/m^3). The instrument measured was a Bei Shu model (Nagano Ken, Japan).

Abstract for the 140th meeting of the Acoustical Society of America, 6 December 2000

The shakuhachi is an end-blown Japanese flute. Like other flutes, it is open at the place of excitation, so it operates at minima of the acoustic impedance. The jet interacts with both the bore impedance and the radiation impedance, which is baffled by the player's face. Large changes in the relative geometry of the instrument and the face contribute to the flexibility in pitch and timbre that are important elements of the traditional playing style, and which gives the instrument much of the expressiveness for which it is renowned.

We report measurements of the impedance spectra (Z(f)) of the bore, and of the baffled radiation load imposed on the jet. Z(f) of the instrument differs from that of the Western flute family because the shakuhachi has neither the narrow chimney of the Western flute, nor the short resonator upstream of the jet. These influence the overal form of Z(f) for the instrument. Other features of Z(f) are explained by the tone hole position and geometry. The Z(f) of the radiation field varies for different playing positions, which has important effects on the tuning of the minima and on the spectral response.

Some related publications. The first of these papers compares the shakuhachi with Western flutes. The second is a technical study of Western flutes from the classical and modern periods. Both are .pdf files.

There is a more detailed discussion of flute acoustics in the main flute site, and in some of our research papers on this topic. We also recommend The Physics of Musical Instruments by N.H. Fletcher and T.D. Rossing (New York: Springer-Verlag, 1998). For the non-scientific reader, there is also an introduction to How do woodwind instruments work..

Expressing the Inexpressible through Silence, then Music...

.
for spirit and nature
.

.
.
in breath through bamboo
.

As John Cage relates in an interview from 1968, published later in For The Birds. Owned by the father-in-law of Morimasa Horiuchi, Aki Dining Restauarant was possibly the first Japanese restaurant in New York City.  Located near Columbia University,  frequent patrons included Daisetz Suzuki and his student John Cage. 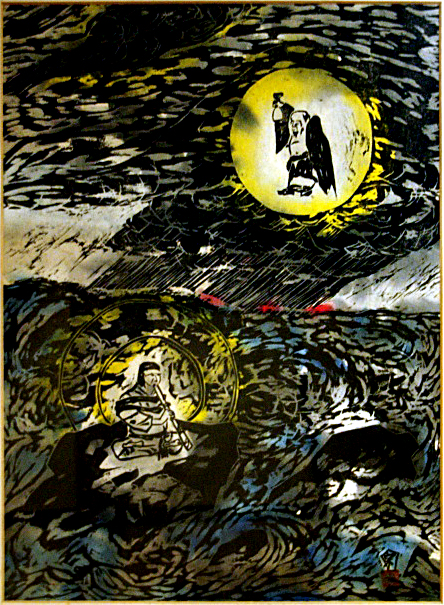 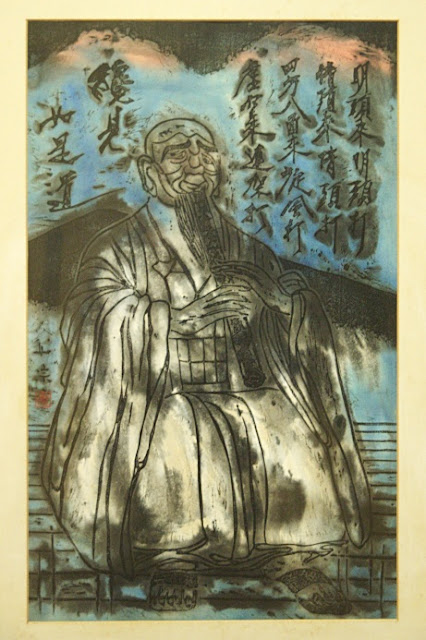 Three paintings from Myoan-ji (temple of light and darkness) in Kyoto.﻿

All in One Long Tones; Sound from the Origin of Being

"The more we know ourselves, the more deeply our sound will communicate to others as we play. One who knows how to listen, hearing only one note that I play, will know exactly my level of self-awareness and compassion. This one note will communicate where am I playing from: the mind, the heart, the solar plexus, the gut, the whole body. Is the sound coming only from the flute as an instrument playing music or is my body/mind/heart also sounding through the flute, the flute as my body? Am I playing from the origin of my being, which is the origin of your being too? How can one come to this?"--Sokau 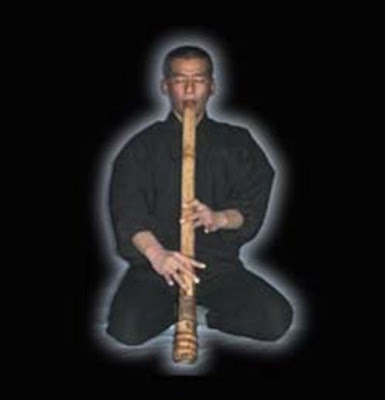 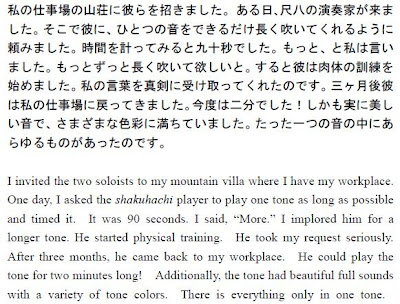 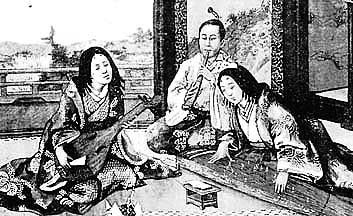 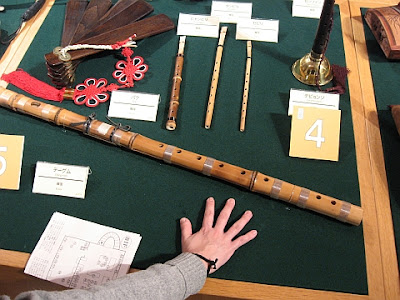 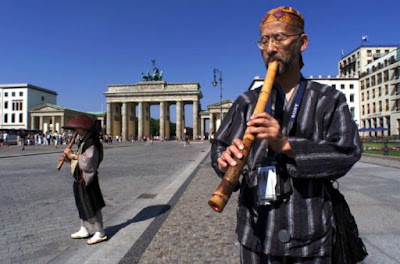 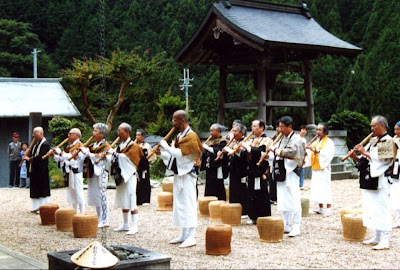 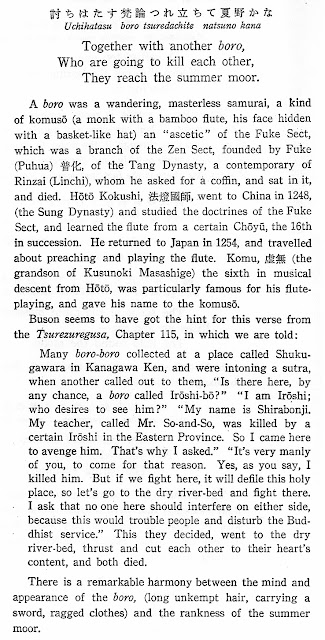 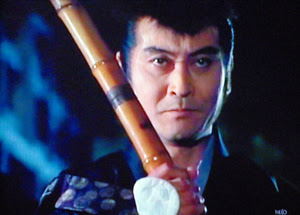 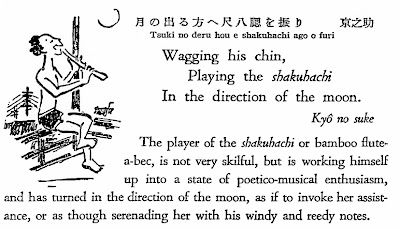 Translated and explained by R.H. Blyth in Senryu (1949) 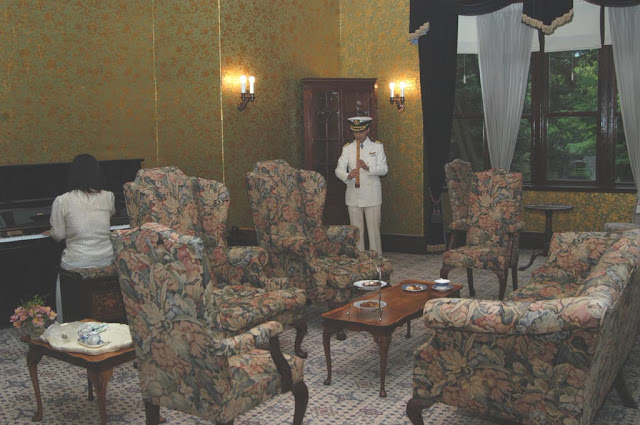 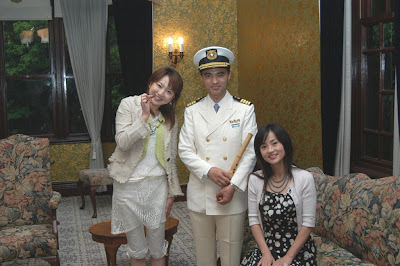