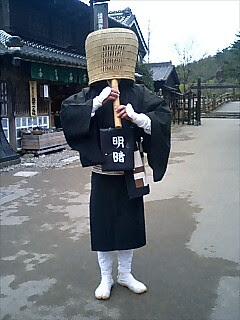 The following account is based on the incomplete research by Nakatsuka Chikuzen, as introduced by Malm in 1959.
"The ranks of the Edo -period komuso were not drawn primarily from the seeker's of Buddha's paradise; rather, they were filled with ronin, masterless samurai who had lost their original rank and privileges during the violent clan struggles that marked the late sixteenth century.  These men sought satisfaction more in earthly revenge than heavenly rewards.  It was from their ranks that many of the early Christians were drawn.  When the Christian movement was halted by the slaughter of Shimabara in 1638, many of these ronin felt their entire class was going to fall victim to the paranoid vengeance of the shogun's government.
It is believed that one group of these desperate men formed a komuso group in Kyoto called the Fukeshu.  In secret, they acquired a building associated with one of the largest Buddhist temples in the hope that the shogun would not view their activities as part of  a Christian revival.  This, their headquarters, they named the Myoan (or Meian) temple.  Despite this precaution, they were subjected to suspicion from other ancillary temples:  in addition to their dislike of the ronin's unsavory background, these other temples were probably afraid of guilt by association. 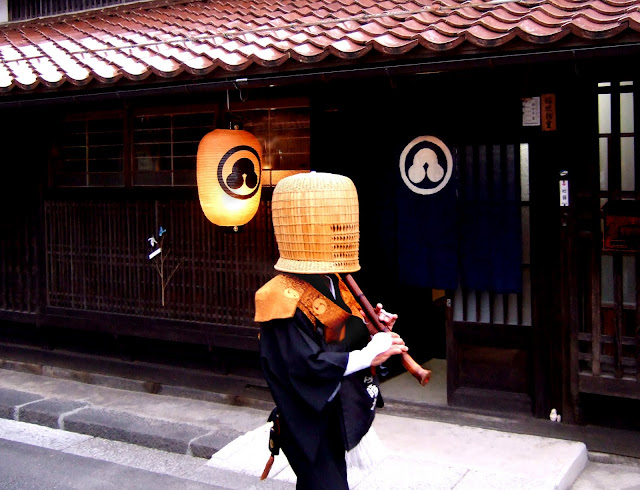 In order to secure their position, the Fukeshu faked a number of papers claiming their historical origins as coming from China; they also produced a copy of a license from the first Edo shogun, Ieyasu, giving them the exclusive right to solicit alms by means of shakuhachi playing.  Armed with these documents, they finally notified the authorities of their existence and asked for official recognition of their temple and their rights.  When the government bureaucrats received this request, they immediately demanded the original Ieyasu document.  The Fukeshu claimed that it had been burned years earlier.  It seemed certain that this group was destined to be short-lived until one of the shogun's wiser advisers suggested that their request be granted.  His reasoning was that the destruction of the group would only scatter and further embitter already vengeful men.  It would be safer to grant them their much coveted security and preferment, on condition that they act as spies for the government and keep track of the going-on of all the other ronin.  Such a proposition was made and accepted. To facilitate the exchange of information as well as control of the organization, the komuso headquarters were moved to Edo, the seat of the shogun's government.  Their "religious" center was established in the Ichigatsuji and Reihoji temples outside the city, while their "business" center was located in the Asakusa, in the heart of the entertainment district.  From there, they could fan out along the avenues and back alleys of this famous pleasure district, playing a few soft melodies and overhearing equally intimate conversations.  Eventually, with the Meiji restoration, the organization was abolished." 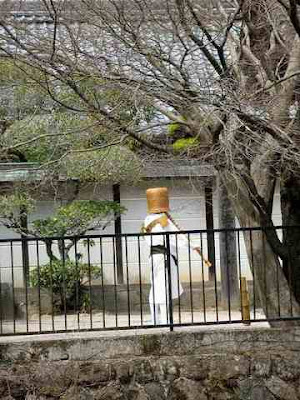